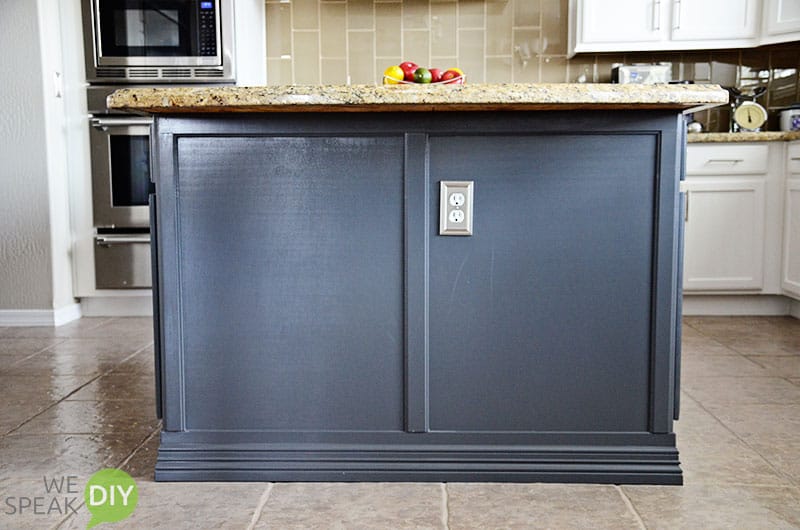 One of the easiest and most dramatic DIY’s I’ve ever done is beef up our kitchen island!

In 2011 when we moved in, we had a standard builder grade kitchen with the standard builder grade cabinets. The house was only 5 years old so they were in good shape.  There was no reason to replace them and frankly, it wasn’t in our budget. However, we did make several improvements. We replaced the laminate with granite and added a backsplash –  we actually did the backsplash TWICE – that story later!  The appliances have all been upgraded and we added a new range hood. 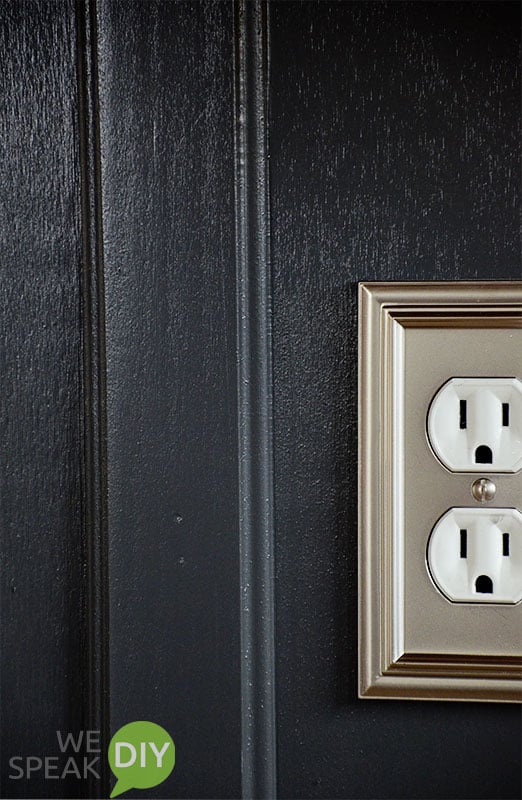 Only Three Steps – But a Dramatic Change!

After we’d done those upgrades, the next step was to paint the cabinets.  I’d been dreaming of white cabinets with a contrasting island and this was the most economical way to get what I wanted.  Since we were painting the cabinets, it was also the perfect time to add upgrade the kitchen island.

Because I was working with an existing island and countertop, I was limited in what I could do.  I couldn’t add to the island because the counter would not cover it and the cabinets were too close to add any trim between the cabinet doors.  So I only did three things, but those three things made a HUGE difference!

Trim added at each end of the island from molding I made with the router was really inexpensive – about $25! 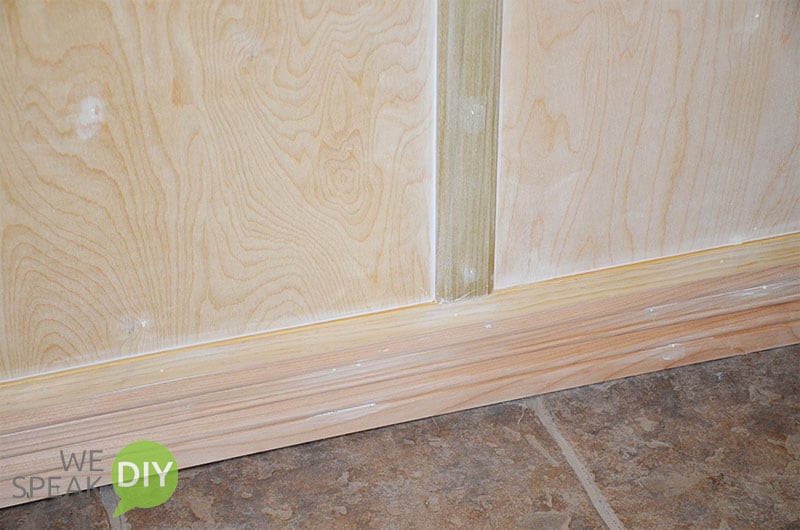 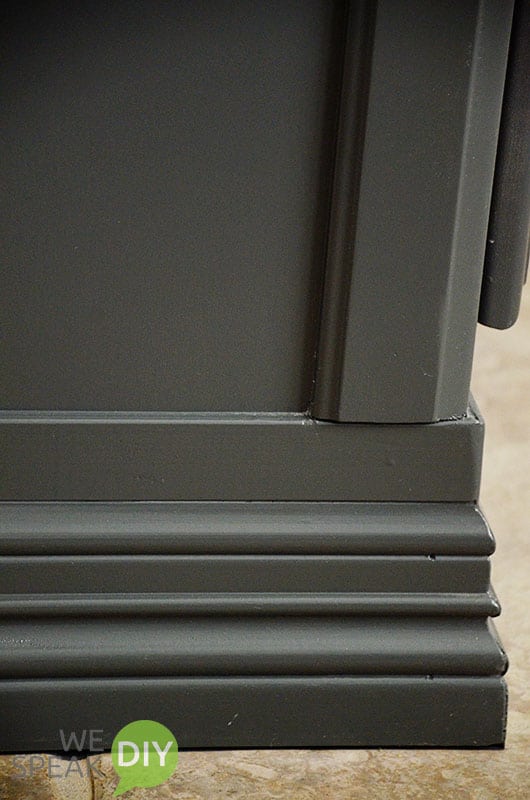 I also added molding around the bottom.  The molding and trim store had the trim on clearance for $3.25 a feet and I used around 21 feet.  I added a narrow trim to the top of that trim because I didn’t think it was substantial enough.  That small trim only cost .75 a foot so the total cost for the bottom molding was $84.

After adding the trim, I filled in the nail holes and used caulking for any seams or gaps.

I used Benjamin Moore Iron Mountain paint color but had it matched in Behr for about $30.

That was all.  Almost anyone could do this and it didn’t cost a lot of money – about $140 and our labor.

If you don’t do woodworking, contact your local woodworkers store like Rockler and Woodworkers Source.  Get the contact information for a few of the local woodworkers.  They can and most will create the moldings you want for your island but be sure to get a few quotes.  I’ve done this in the past before I had all the tools and sometimes the differences in prices were really dramatic!  Even after having a woodworker create your molding, this project shouldn’t be over $300.  And that is definitely much less expensive than getting a new kitchen island!! And it made a HUGE difference! 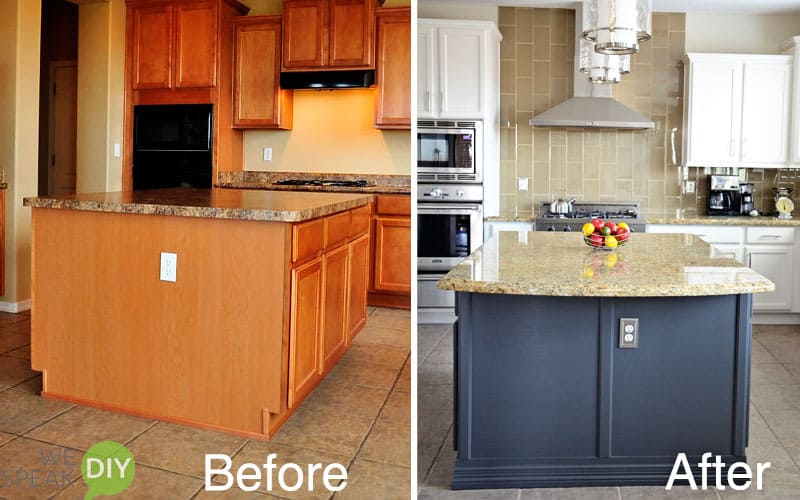 Previous Post: « YEP – WE’VE GO TO WIDEN THE DOORWAY
Next Post: HOW TO USE STEEL WOOL AND VINEGAR TO MAKE WEATHERED WOOD »

Thanks for coming by!

Hi. I'm Teresa and like most, I wear several hats. I'm a wife, mother, friend and daughter. I love my life and the people in my life. I'm glad I get to share one of the things I love to do with you - improving my home by fixing what's broken, building what's needed, beautifying my surroundings and having fun while I'm doing it (for the most part!) I speak DIY and I'd love to talk to you! 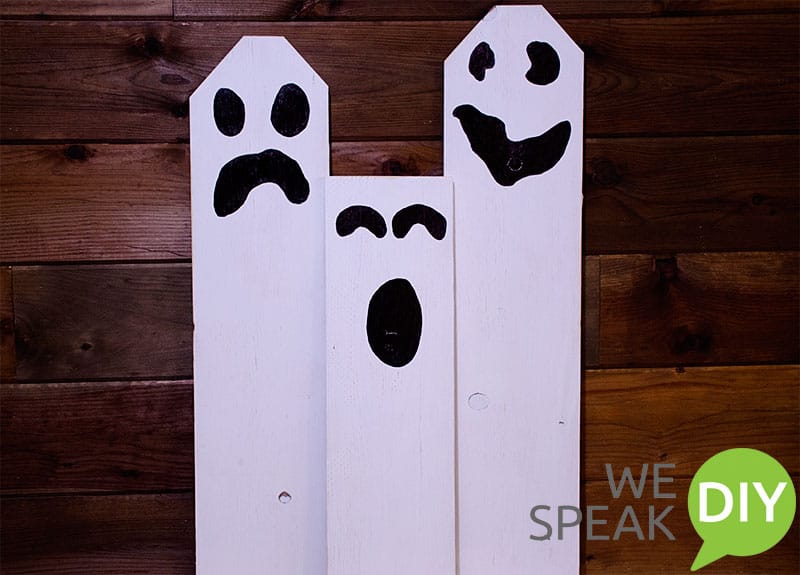 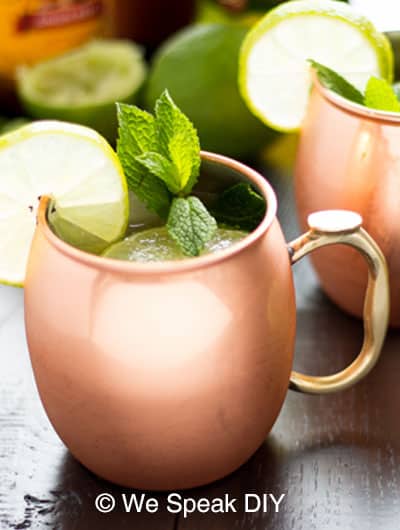 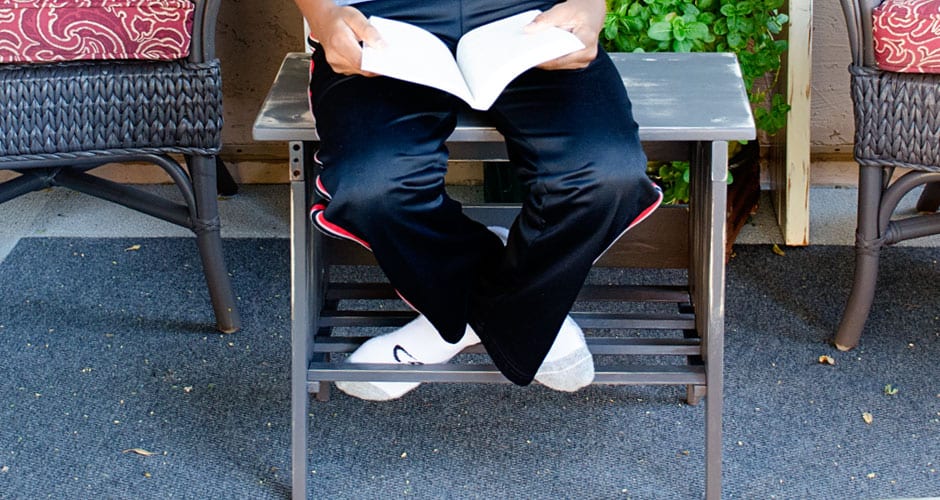 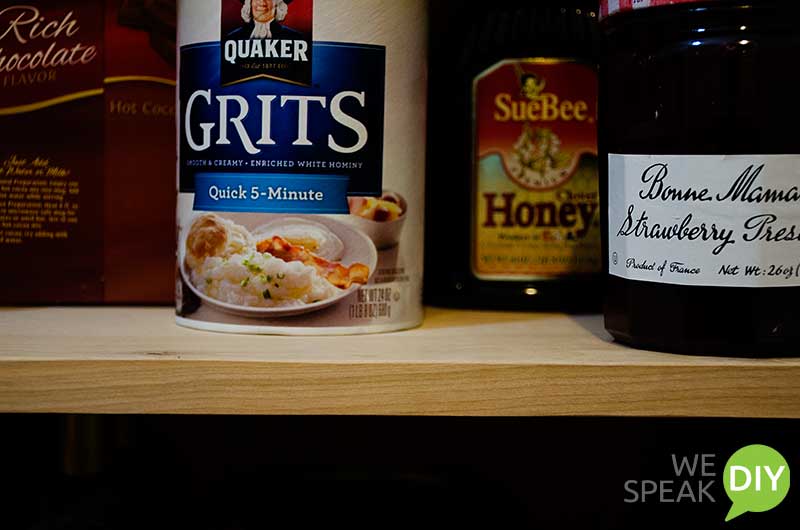 Anyone who works with wood on a regular basis (and is a little bit of a hoarder!) knows about scrap wood.  It grows, it multiplies, it takes over spaces and it is really hard to throw away however, it just feels wrong to get rid of something that could be made beautiful!    But, I've ...
END_OF_DOCUMENT_TOKEN_TO_BE_REPLACED

Growing up, we spent a lot of time on the front porch.  Neighbors walking by would stop to catch up on the latest gossip. Kids made a game of jumping up and down the steps. Without a doubt, our porch was a popular gathering place. My dad built that porch and all the seating that accommodated ...
END_OF_DOCUMENT_TOKEN_TO_BE_REPLACED

Hey ya’ll!  I’ve been missing in action for a couple of weeks…had to take care of a couple of family things.  I’ve missed interacting with by fellow DIYers and I’m so glad to be back! I'm participating in some awesome link parties with several of my awesome blog sisters over the next few weeks!  ...
END_OF_DOCUMENT_TOKEN_TO_BE_REPLACED 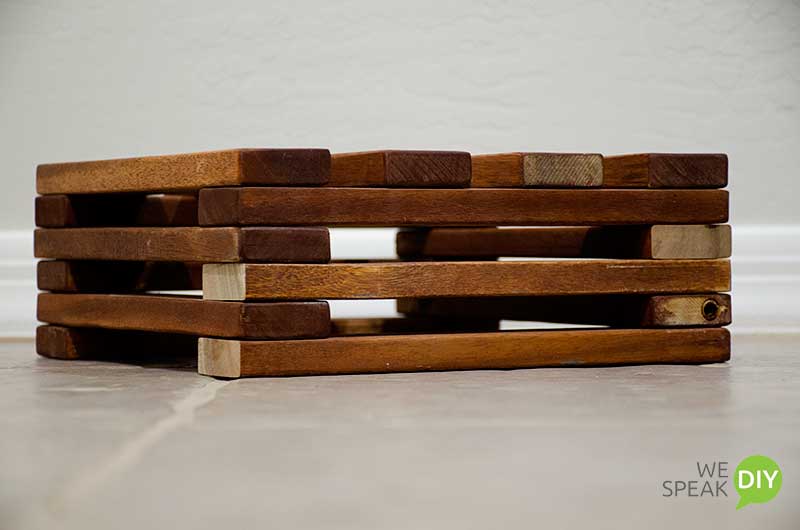 Let me first say that I do not have a green thumb...but I do love plants!  And I like the way plants add color and texture to our front porch.  So one of the projects for our front porch are plant stands for the plants that have the willpower to survive my planting skills.  This is the easiest DIY ...
END_OF_DOCUMENT_TOKEN_TO_BE_REPLACED

More Posts from this Category 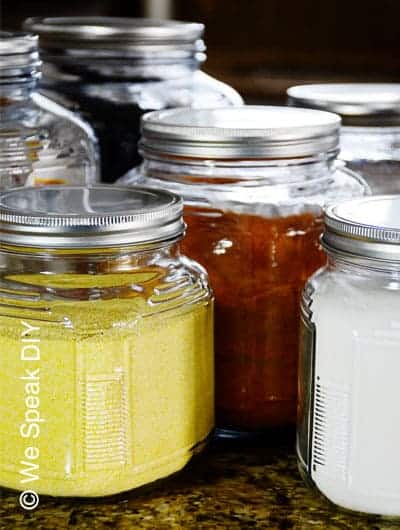 Before we began working on the pantry, a hodgepodge of containers purchased over the years held all our staples. Some of them still functioned well, others…not so well! One of my pantry goals was ...
END_OF_DOCUMENT_TOKEN_TO_BE_REPLACED 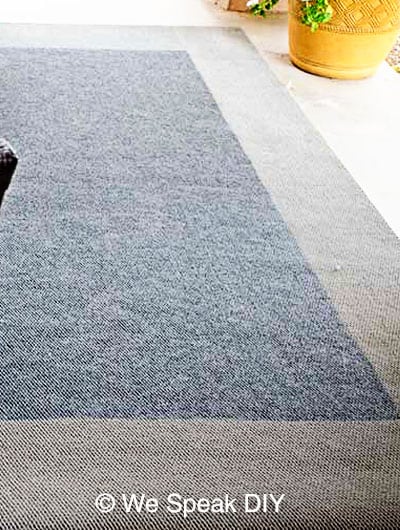 About a year ago, I bought seagrass matting for our front porch. I was on a tight budget and at the time, it was the best solution I could find. But the harsh Arizona sun and heat has not been kind to ...
END_OF_DOCUMENT_TOKEN_TO_BE_REPLACED 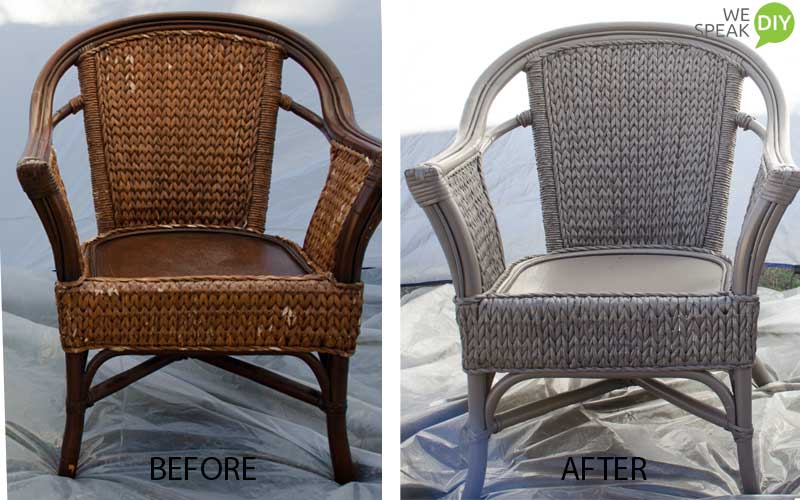 If you’ve been following my other projects, you already know I hate to sand. Second to sanding is painting! So whenever there’s painting to be done, I call in my husband. He is the resident painter in ...
END_OF_DOCUMENT_TOKEN_TO_BE_REPLACED

I promised I would share the steel wool and vinegar stain I used to create the weathered wood boards used for our wood plank accent wall.  This recipe is nothing new…it’s been around for a long time.  ...
END_OF_DOCUMENT_TOKEN_TO_BE_REPLACED

More Posts from this Category

Stay up to date

All the images displayed in the Beloved theme are available in our shop here.

When you take a wrong turn with your partner in cr

When your bread pudding is actually a mountain!

I love making pizzas with my family. Our pizza ma

When you go in search of the perfect gray for your

Life is what you make of it. You can complain and

Chairs and stools for the patio makeover are here

Thanks to my better half @antoinecoffer for finish

This error message is only visible to WordPress admins


Error: API requests are being delayed for this account. New posts will not be retrieved.

All you need is love. And coffee. Must have coffee.

When you take a wrong turn with your partner in cr

When your bread pudding is actually a mountain!

I love making pizzas with my family. Our pizza ma

When you go in search of the perfect gray for your


Error: API requests are being delayed for this account. New posts will not be retrieved.